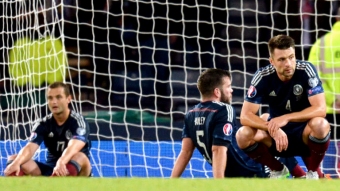 If there’s one thing Scotland supporters have had to get used to over the years, it’s failing even when it seemed we had succeeded!

In the last couple of weeks we suffered two glorious failures again when both our football team failed to qualify for next year’s European championships finals despite being 2-1 up against Poland with just seconds to go, we conceded a very late goal which meant there was no chance of us to qualify for the finals.

Then a few days later our ruby team faced Australia in the quarter finals of the rugby world cup. At the start of the game the odds were firmly stacked against Scotland to beat Australia, but with less than 2 minutes to go Scotland were 2 points up and looking good to win the game…but then we failed to win our own line out and then disaster, the referee

awarded Australia a controversial penalty which they duly converted just before the final whistle sounded.

Another two disappointments for Scottish football and rugby fans. We’re all gutted we’ve missed out, but next time round we’ll be behind the teams once again, cheering them on, regardless of how well or otherwise they do.

So c’mon Scotland, let’s not be so close and then fail again, let’s be successful and qualify!