Have you ever had something planned, and when the time comes for that event, you’re all good to go, but then something happens that completely changes your plans?

Well I’ve just had one of those weekends! I was meant to be going to Coventry with Bellshill Salvation Army Band, where we were leading worship there on Saturday night and Sunday morning and afternoon. I had been uncertain for a while whether I’d be well enough to go to the Coventry with the band, but decided a few weeks ago I should be well enough. 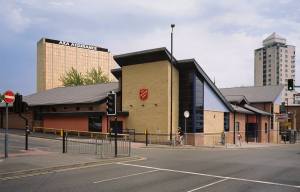 So I had to get up early on Saturday to get myself ready to go with the band. When we got up my husband mentioned he wasn’t feeling great. However it wasn’t until I had put all my stuff into my car and was almost ready to leave that I realised how unwell he was.

To cut a long story short, I realised I couldn’t go with the band. So I had to make a phone call I really hadn’t expected to have to make, at least I’d thought if I’d had to make that call, it would have been because I wasn’t well.

So what was going to be a very long and tiring weekend for me away with the band, turned out quite different for me. It was a really emotional weekend for me between my husband being unwell, plus I’d got myself worked up about going with the band as I hadn’t been 100% sure how well I would feel by the end of the weekend. I was really upset about missing the weekend, particularly as it had taken me a while to realise I’d be well enough to go, and then at the last minute, not being able to go. I prayed and prayed some more, I was struggling to cope with what was happening. Thankfully by Sunday my husband was feeling a bit better; the band had a fantastic weekend in Coventry – If you’re interested you can read reports of the weekend, and watch the meetings from our band Facebook page.

When unexpected things happen, we all react differently, and even that depends what has actually happened. After all not all unexpected events are bad ones!

So whenever you have to deal with something unexpected, pray and God will provide all you need.