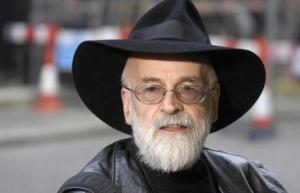 On Monday night this last week, there was a TV documentary entitled “Terri Pratchett: Choosing To Die”which followed Alzheimer’s sufferer Sir Terri Pratchett as he considered his options regarding prematurely ending his own life by committing assisted suicide. Sir Terry travelled to the Dignitas Clinic in Switzerland and witnessed first-hand the procedures for assisted death.

A tough topic, but one I felt I wanted to watch as it touched on a sensitive subject, especially as it followed Sir Terri an Alzheimer sufferer – an illness that’s as a family we are dealing with at this time.

It took me a while to decide whether I was strong enough emotionally to watch this programme, but finally, just before the programme started I decided I would watch it…and I’m glad I did.

Those diagnosed with terminal or progressive illnesses have limited options on how they will see out the remainder of their life: 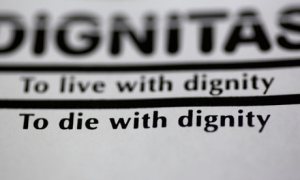 One of the biggest issues the people featured on the TV programme felt about their future was the lack of quality of life they had/would have, and the burden they would be on their carer.

The thing is, is it really up to the person with the illness to decide that they don’t want to burden themselves on their carer? Is it not up to the carer to determine whether they want to and are able to care for their family member or friend.

On the other hand without actually being in the position of the person with the illness, would we ever really know what the person’s quality of life was – People can often look and act as if nothing is wrong, however they may simply be hiding their problems/their pain from those around them.

The other big thing that I noted in the documentary was that at the Dignitas clinic in Switzerland where they assisted with the deaths, they showed us a room full of case files. About one third/or a quarter of the case files were one colour and the remainder another – the majority of the case files were of people who had visited the clinic to ask to take up the option of assisted death however they had never done so…

On the programme they indicated that for many people who consider assisted death it was simply knowing they could go to Dignitas to end their life when they wanted, often meant the person never take it up. I’m not quite sure how I felt about this – on one hand there appeared to be lots of folk wanting the option to end their life, but the majority of them never went through with it…second thoughts perhaps!

For me, and for many I’ve spoken to, the toughest part of the programme was when we were told that the 42 year old (my age!) MS sufferer, had gone through with his assisted death…it just seemed such a waste of a life. For this case as with others who took up the assisted death option, I think it must be harder for those the people leave behind that for those who have chosen to die.

Even the last part of this programme when we witnessed a motor neuron sufferer go through with assisted death in one of the Dignitas rooms in Switzerland, I personally felt more for the man’s wife who sat beside her husband during his last moments and had to watch him drink the fatal liquid, than I did for the man ending his life. Is that wrong? Maybe it’s because it felt as though he was taking the “easy” option, while his wife was being left behind to deal with her grief and her loneliness without him – After all she had stated earlier in the programme that she didn’t wanted her husband to end his life, however she would support him in his decision – That really must have been very very tough for her.

At the end of the documentary Sir Terri Pratchett stated that he had found meeting both those who chose to end their life and someone who had decided to live out his life in a hospice, helpful, however he was no nearer deciding what he wanted for his future. The difficulty faced by Sir Terri is that as an Alzheimer sufferer he will need to choose earlier than those with other illnesses, whether he want to die prematurely, as otherwise the disease will prevent him from either understanding or having the ability to say the words that they want to die.

So did this programme change my view on assisted death? No it didn’t, although I must admit I did get a far greater understanding of why this option is chosen by some.

I feel we must continue to support people to live, not assist them to die. I hope you will join me in praying for all those who may be considering assisted death.