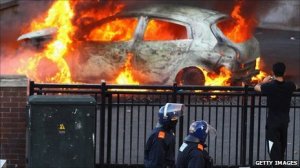 Having watched and listened to a lot of coverage of the riots in England in the last few days, I’ve come to the conclusion that many youngsters, and in some cases, their parents, just do not understand the meaning of the word respect.

I’ve heard several interviews where individuals have said they were upset that “the police and politicians don’t respect them”! What was obvious from what these people were saying was that they did not comprehend that respect is something they must earn, not something you should automatically gain.

Here are some definitions of respect that I’ve found in various dictionaries:

How can people expect to be respected if they don’t treat other people, their property’s and their belonging, with respect!

I really don’t want to get into the whole discussion about why the recent riots took place, but I feel I had to mention the lack of respect that has been shown by so many. Many were youngsters who obviously had never been taught how to respect and treat others or their belongings. That really saddened and upset me, as it just seems to show how much the world and the way families and communities interact these days has broken down over the past few years.

Come folks, let’s get back to basics and teach our children right from wrong, respect from disregard…