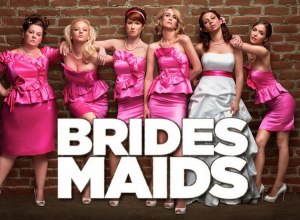 A couple of weeks ago we finally got around to watching our DVD of the 2011 smash-hit Bridemaids, and what a disappointment it was!

What I find surprising is the fact that every review we’ve read of the film gives it a glowing report. For example, The Observer said

Subtlety and character lift this hilarious comedy above the rest

A marriage of genuine characters, gross out gags, and pathos, Bridesmaids is a female-driven comedy that refuses to be boxed in as Kristen Wiig emerges as a real star

So what’s the film about?

It’s all about Annie (Kristen Wiig) whose best friend gets engaged and Annie becomes her maid of honour. Annie’s life is really a mess as she is broke and lovelorn, but somehow still attempts to bluff her way through some strange rituals with the other bridesmaid and of course the bride-to-be. Despite all the setbacks, Annie is determined to prove to her friend Lillian (Maya Rudolph) that she has chosen the right person to be her maid of honour, and that she is willing to do anything for her friend.

Why did we not enjoy the film?

We’d seen the trailers and a number of reviews of the film, all of which were very positive, and suggested it would be a laugh-a-minute comedy, but sadly in our opinion, it failed to live up to those expectations.

Right from the start of the film we both found it very slow, as it seemed to take ages to get going. Even once it did finally get into first gear the jokes we lame, and the humour was at best childish.

We found the film so unfunny that we even considered not watching it all the way through, but just in case we turned it off just before it burst into life, we decided to stick it out to the end…I’m almost tempted to say to the bitter end! Actually the best bit of the whole film was actually the very last bit of the movie…I’ll not spoil that bit for those of you who haven’t seen it, but suffice to say the band were excellent!

If you’re looking for a real laugh-a-minute comedy this is definitely not the film for you.

However if you like the odd laugh at something particularly childish and unfunny, enjoy!